Organisations come together to recognise the 300 men who die by suicide a month across the UK.

Organisations come together to recognise the 300 men who die by suicide a month across the UK. 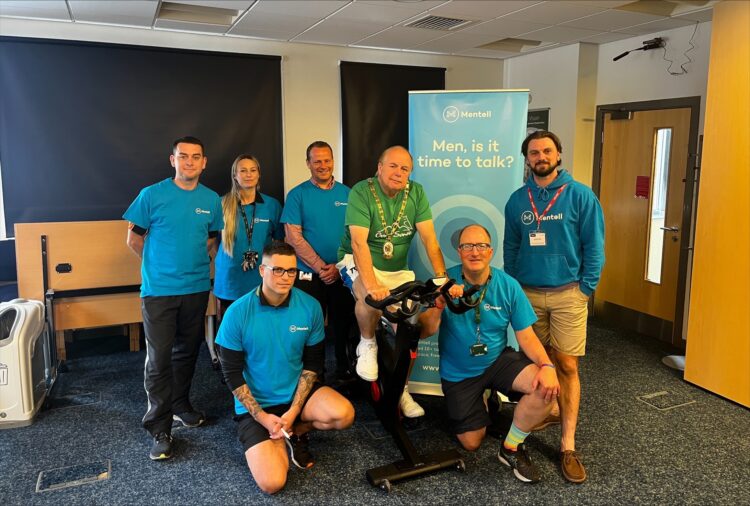 13th– 19th June was Men’s Health Week and as part of this campaign Everybody Health and Leisure and Mentell joined up to support Cheshire East Council’s staff event.

The event started as an idea from the council’s male support group ‘The Circle’, which meets fortnightly, and then developed with the support of colleagues more widely across the organisation.

The event which took place on Thursday 16th June, was to recognise the 300 men who die by suicide a month across the UK, raise awareness of the importance of positive men’s health and to fundraise for one of Cheshire East Council’s commissioned charities, Mentell. The Council’s new mobile health and wellbeing bus attended the event to offer blood pressure checks and free general health MOTs to staff.

“It’s really important for men to talk about the things that concern them. Men are far less likely to ask for advice or see their GP and,  as a result of this, are more likely to experience loneliness and isolation.

“So this collaborative fundraising and awareness event between the council, Everybody and the men’s health charity Mentell is a great way of both signposting men to the support that is available and to simply allow a natural opportunity to engage with colleagues. I am very happy to support it.”

Everybody Health and Leisure who were in attendance of the event provided an exercise bike, where a number of Council staff participated in over 300 minutes of cycling and a total of 145.2km was cycled over the day.

As well as this, they provided goody bags to everyone who took part and information on their health and leisure services available across Cheshire East.

“We were delighted to be asked by Cheshire East Council to be a part of their event during Men’s Health Week alongside Mentell. To be able to provide an exercise bike as part of their fundraising event as well as being there to raise awareness of the services we have to offer to support their staff is important to us as a charity.”

Mentell who also attended the event, shared information about their service and how to use their referral links. The event gave Cheshire East Council staff the opportunity to support their nominated charity Mentell with a donation towards the outstanding work that they do.

Everybody Health and Leisure is a registered charity which aims to provide ‘leisure for life’ by improving the health and wellbeing of local communities. The charity operates 16 leisure facilities including 9 swimming pools and 7 Taste for Life cafes across the Cheshire East region, and delivers a range of targeted health, sports and disability and inclusion programmes. For more information please visit: www.everybody.org.uk or follow on Twitter @ebleisure.